The emotional, sexual, and psychological stereotyping of females begins when the doctor says, “It’s a girl.”

October 11 marks the International Day of the Girl (IDG), a day for celebrating how far we have come in undoing this stereotyping and committing to the continual fight against injustices and encroachment upon the rights of the girl child. This year, to celebrate the 10th anniversary of the day, the annual IDG Summit Girls SpeakOut was hosted in a hybrid format with the theme ‘Mind the Gap- Girls Rights Now!’

As the event delved into the gaps that remain in the full realisation of girls’ rights, girl activists from around the globe shared their experiences in a candid discussion with UN representatives. The discussion was held in three segments about access to education, survival and protection against violence, and girls as agents of change, all highlighted under the framework established at the UN Convention on the Rights of the Child in 1989 and the Beijing Declaration and Platform for Action from 1995.

Kashvi Agarwal, a girl advocate from India representing the IBVM UN NGO, was one of the moderators of this year’s Girls Speak Out. The event was organized by the Working Group on Girls and UN Women, and co-sponsored by the Permanent Missions of Canada, Peru, and Türkiye to the United Nations.

The Girls SpeakOut saw girl advocates take centre stage as they told their stories and championed their activism, with the UN Representatives espousing their cause and joining their call for equality. The discussion was led by girls asking imperative questions about accountability to existing commitments, implementation of policies to protect girls from violence and discrimination, and accessibility to resources and safe havens.

This year’s Girls Speak Out was a dive into the activism of the years past, the long way we still have left to go and, the urgent reminder that the call from girls around the world is “Girls Rights Now!” 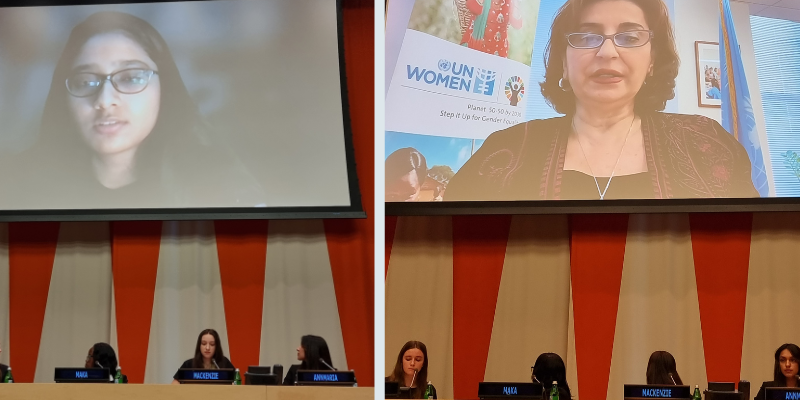